Experience: All the Action from India’s Biggest DJ Battle by Tito’s

Tito’s, the biggest brand in Nightlife & Entertainment is hosting 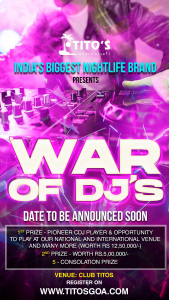 War of DJs for all International and National Artists. War of DJs will pit some of the country’s top DJ crews against each other in a showdown to end all showdowns.

The competition is fierce and each round is judged on how well the DJs can whip the crowd into a frenzy and battle it out for their chance to be the reigning champs. With drinks, music, and unmissable fun, DJs can enter the competition on 2nd October, Sunday.

Fans can vote for their favorite DJs and the top 12 DJs will be then invited to compete in the war at Club Tito’s on final date will be announced to duke it out.

Entry Fee : ₹ 1999/- (Note: Contestants will be allowed for Auditions once Entry Fee payment is done)

War of DJS by Tito’s

War of DJs by Tito’s is created to bring domestic and International DJs together along with an adrenaline-induced level of entertainment to the Goan market that offers an influential, energetic and biggest event yet! It’s time to turn up and get down for one of the biggest finals.

A limited number of opportunities are currently available, so start registering below.

We are here to help you, feel free to call us or send us a message

Get In Touch for Reservations & Bookings

Private Hire or Host an Event

If you would like to book our Café Mambo or Club Tito’s Nightclub for birthdays and other special events, please get in touch with us to find out more. Call +91 9657570428

Download the Ez Tickets app and get amazing discounts and offer exclusively on app. Also manage all your bookings.